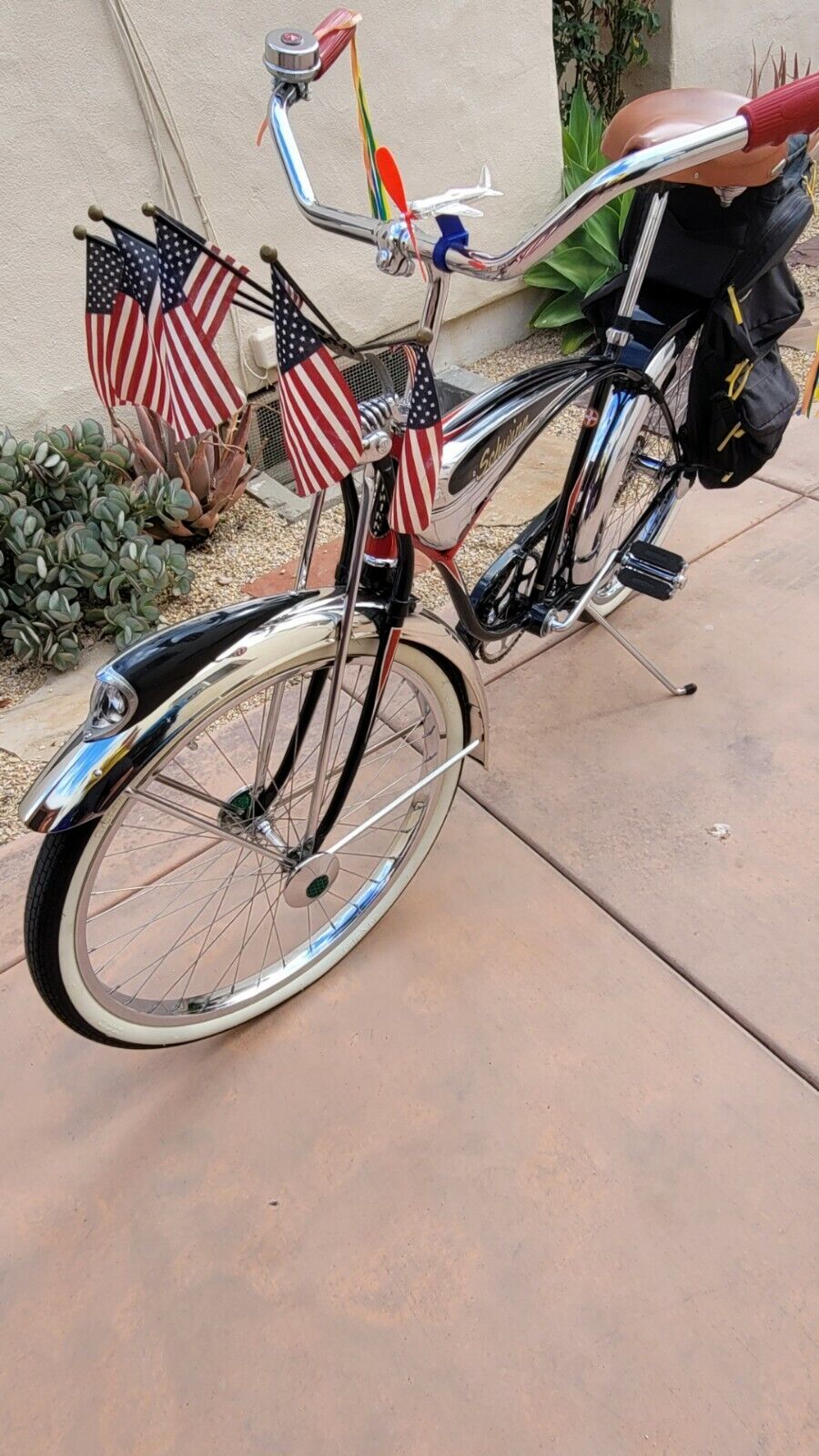 One of the most enduring images of life in “Anytown America” during the 1950s is the paperboy rolling through the neighborhood on his balloon tire bike. During the ’50s there probably wasn’t a boy in the United States who wouldn’t have given his right arm for a Schwinn Black Phantom, the jewel in the crown, and possibly the most beautiful and most highly sought after balloon tire cruiser ever built.

The Schwinn Black Phantom was introduced by the Schwinn Bicycle Company of Chicago in 1949 and came with a then hefty price tag of $89 plus change. If they weren’t lucky enough to have very generous parents, a kid had to deliver a huge pile of newspapers to save up enough money to buy one of these black beauties with their own money.

The Schwinn Black Phantom was designed to look like a small motorcycle – right down to the working head and brake lights, and gas tank. The frame was based on the cantilever design patented by Frank Schwinn in 1938. The first year it was introduced, the Black Phantom was only available as a 26″ (wheel size) boy’s model. The bike was painted gleaming gloss black with red trim. Standard features included chrome fenders and horn, headlight and tail light, whitewall tires, springer fork (just like on a motorcycle), and a deluxe leather saddle.

In 1950, Green and Red Phantoms were introduced. They were essentially the same as the Black Phantom except for the color. In 1953 and 1954, a 24″ boy’s model was introduced, and in 1955, a 26″ girl’s model was released. It didn’t last long, however. The Schwinn Black Phantom stayed in production until 1959.

Today, an original Schwinn Black Phantom is highly collectible. These bikes are among the most highly sought after collectible bikes in the world.

The price depends on several factors including condition, date of manufacture, and whether the bike is fully original or complete (assembled from original parts salvaged from several bikes). Prices range from around $300 for a bike that’s in rough shape and missing parts, to $4000 for a fully (and properly) restored example.

In 1995, Schwinn introduced a very high-quality reproduction of the Black Phantom to celebrate the company’s 100th anniversary. Around 3000 bikes were made and sold for around $3000. The company had planned to build 5000, but because of slow sales, leftover frames were repainted to be made into reproductions of Green and Red Phantoms.

The reproduction bikes have become quite valuable in their own right, partly because of the insufficient production numbers. Today Schwinn sells a line of Phantom inspired aftermarket accessories such as gas tanks, fenders, rear carriers, and spring forks.

Paperboy bikes or cruisers like the Schwinn Black Phantom remind us of the simple joy of riding a bike. They weren’t light, and they weren’t built for speed, but if you had one, you were the envy of every kid in your neighborhood.